Whist is a four person game that was popular, similar to (and a precursor of) bridge today. Loo is a simplified version.

For Whist, The persons across the table from each other are partners. To begin, the Dealer shuffles the card, then the person to his right cuts.The dealer deals out all cards, starting with the person on his left. When he comes to the last card (dealt to himself), he turns it over so everyone can see.The suit of this card will be “trump” (hearts, diamonds, clubs, spades). He then picks it up and puts it in his hand, along with the others.

The person on dealer’s left (“The Elder Hand”) begins by laying down a card. This is “the lead”. Each person follows in turn, moving clockwise, until each has played one card.This one round of four cards is called “a trick”.

Each player must follow the suit of the lead card, if he or she has any cards in that suit. So if a heart is led, each player must play a heart. If the player does not have a card in the suit led, however, then he or she may lead a “trump”. The highest card wins – this is called “taking a trick.” Normally the highest card is the highest in the suit that is led, but a card in the trump suit will win over the suit led. That is why it is called “trump” – it trumps anything else.

The partner of whoever wins that round picks up the “trick” (the four cards played) and places it in front of them, face down. The person who wins then leads another card to begin the next round, and so forth until all the cards have been played. This one round of play is the first “hand”.

The players go on to a second “hand,” which is played the same, except the dealer is the next person on the left. Everyone goes on playing hand after hand until the players decide to quit. 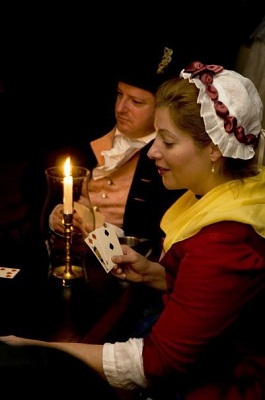 Scoring Each Hand — The couple with the most tricks wins the hand. Each trick over six counts as one point (a “trick point”). More hands are dealt and played until one couple gets the number of points that is set for a “Game.”

Honor points: Honor points are given when one couple has, between their two hands, either three or four of the highest cards (“honors” = Jack, Queen, King and Ace) in the trump suit. Four points are given if they have all four honors, and two points if they have three of the four. To get honor points, the couple must “call honors” – i.e., say that they have the honors.This must be done before the next hand is dealt — normally toward or at the end of the hand, when the honors have been played.

Revokes: A revoke may happen when you mistakenly think you do not have the suit lead and play a trump, but in fact you still have a card in the suit led that you should play.This is something that must be corrected, if possible, before the round is over and the trick is picked up.If not, it is a “revoke”.If the other couple notices this before the game goes on to the next hand, they must “call the revoke” – i.e., say something about it.Then the couple that committed the revoke is given a penalty of three points.The other couple can choose whether to add these three points to their score or deduct them from yours.

Scoring the Game — The number of points in a Game varies. It could be ten points, seven or five. In traditional English play, a game would be ten points. The ten points could be made up entirely of trick points, but there could also be honor points or revokes. It appears that in 18th century America, however, it was more common to play a game of five points (“short whist”) and one might also skip points for honors (but points would still be given for revokes). A game might also be played for seven points.The players should agree on this ahead of time.

Loo can be played in five and three card versions. It is basically a simpler and faster version of whist (the forerunner of bridge) and is good for gambling. The directions below are for a very basic version. Some versions have more elaborate rules, more similar to poker, but one has to wonder if this isn’t a later development.

Any number of people can play, though three to five are recommended.  (There is also a three-card version, which is played a bit differently –http://sopgaming.blogspot.com/2010/09/colonial-gaming-how-to-play-loo.html )

How to Play
Deal five cards one at a time to each player, starting to the left of the dealer.  The last card dealt is then turned up to designate the Trump suit. Each player plays one card in turn, starting with the person sitting to the left of the dealer.  Each must play a card in the suit that was first played, if they are able.  If they don’t have any cards in the suit led, they may play any other card.

For each round, the highest card in the suit first played wins the round.  If, however, someone has none of that suit and plays a Trump, the Trump wins.  If more than one person plays a trump, the highest is the winner.  Highest of all is the Jack of Clubs (called “Pam”) – which wins over everything.  Remember, though – each player must follow the suit first played if they’re able to.

The cards played in each round are then gathered up – this is called a “trick” – and placed in a neat pile face-down in front of the winner. (This helps keep track of how many tricks each person has won so far.)  The winner of that round plays the card to start the next round.  This goes on until the all the deck is dealt out.